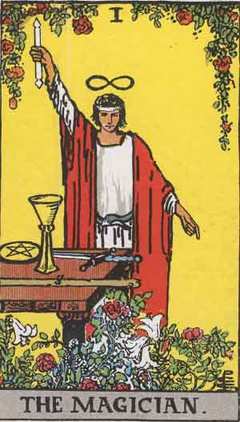 You arrive at the path of the schmoozer…

The journey of the schmoozer represents the magic of possibilities, discipline and focus.

The Magician is the charming negotiator with magical communication skills. His verbal eloquence makes him a persuasive speaker, salesperson or negotiator, but also a deceptive trickster, or bluffer when he uses his elocutionary gifts to accomplish darker goals.

Astrologically, the Magician is ruled by the planet Mercury, the planet of speed! Mercury determines the speed at which you gather information, think, talk, analyze, write and travel, and gives you a good clue to why the timing of the Magician card is rather fast and sometimes unpredictable.

The Major Arcana Represents Significant Life Lessons: If the Magician appears on the first card of your reading, the Magician is in a hurry like the Fool (unpredictable), and might learn a new lesson. If the Magician card appears in the outcome of your reading, he represents the magic of possibilities. You are going to put your plans into action, or you will meet a person that portends charisma and magnetism for you.

The Story Of The Magician Tarot Card

The Magician is enumerated one in the Tarot deck, the number one referring to the self. He symbolizes new beginnings, where all things are possible, and his confidence enables him to focus all his attention on the realization of his dreams.

This card depicts a young, attractive, robed male emanating confidence. The yellow sky reflects his vitality, and the green vines that hover above him are symbolic of his continuous growth.

The sign of infinity — and of the Holy Spirit — shimmers above his head. This lemniscate symbol represents his thoughts and indicates eternal power. The Magician knows his energy cannot be destroyed as long as he has control of his thoughts.

He holds a bi-directional staff in his right hand, pointing towards the Heavens and the Earth, signifying his power as a conduit for the Holy Spirit. His left hand points toward Earth, directing spiritual energy that descends from above to the Earth. Infinite powers flow through him — as a vessel from the celestial heaven — on their ineffable path to the Earth.

Timelessness and limitless power are also conveyed by the Magician’s belt, which recalls the Ouroboros serpent shedding its skin and devouring its own tail, an act that suggest infinity, rebirth, immortality, rejuvenation, and eternity. Whatever befalls the Magician, he recuperates quickly and sheds the past as the serpent sheds its skin.

The Magician’s tools sit on the red table, a sword, wand, cup, and pentacle, representing the four elements of the zodiac relating to air, fire, water, and earth. The Magician asserts his mastery of his tools, refusing to allow them control over him.

Spread before him are white lilies (representing purity) interspersed with a blaze of red roses (representing his abstract thoughts and desires). Above the Magician is an abundance of yet more red roses, tokens of his passion. White and red surface yet again in his apparel as balanced colors — a white gown, white bandana and a red cloak — the color white symbolic of femininity and purity, the color red symbolic of masculinity and passion.

Fueled by a strong desire to achieve and dominate, he can nevertheless suffer under the burden of the past and emerges from its spell at times only with difficulty. When so burdened, the Magician can become a trickster or bluffer and skillfully creates an illusion of preparedness that belies his true condition because, of course, he wants to win. The Magician symbolizes new beginnings, where all things are possible, and his confidence enables him to focus all his attention on the task at hand. His mastery and capacity for focus are unshakable.

My Interpretation Of The Magician Tarot Card

The Magician is connected to the planet Mercury — aptly so considering its parallels with his power of communication and manner of thinking. In his lowest form, the Magician embodies the mind of the deceitful and cunning trickster or bluffer; yet on a higher level he corresponds to the fascinating workings of a rational, objective mind. His thinking is short term, rooted firmly in the present. He is quick to contradict, but also to come up with answers.

When he feels incapable of freeing himself from the clutches of the past, his iron will wards him against harm or failure. The Magician never discloses his inscrutable plans because of his need to win at all he sets his hand to. He uses his charm and communication skills to persuade the people around him to agree with his way of thinking.

Positive Position: You will put your plans into action because you are looking forward to the magic of possibilities. You are confident, focused, and all your attention is related to the realization of your dreams.