Gypsy magic which is also known as Romani magic is a form of nature-based magic that involves the use of signs, symbols and amulets. Its origin can be traced to Asia and over the years it has spread around the globe. Gypsy magic is very powerful and works with the principles of traditional beliefs and ideas.

Folklorist Charles Godfrey Leland studied the Rom and their legends and wrote extensively on the subject. In his 1891 work, Gypsy Sorcery and Fortune Telling, Leland says that much of the popular Romani magic was dedicated to practical applications – love spells, charms, recovery of stolen property, protection of livestock, and other such things.

Leland explains that the Rom are strong believers in amulets and talismans and that items carried in one’s pocket – a coin, a stone – become imbued with the characteristics of the bearer. He refers to these as “pocket deities,” and says that certain objects were automatically conferred great power – shells and knives in particular.

Do you have someone you would love to attract to yourself using magic? If yes, then these Gypsy attraction spells might be what you need.

You must perform this spell at night and in an outdoor location.

•             With your left hand, take out a handful of leaves, and toss them onto the fire. As they burst into flames, chant the following:

“This is the fire that represents the flame of love that I feel for you (say the name of the beloved).

I invoke the powers of nature to attract your gaze and make you fall in love with me.

I open my heart to (say the name of beloved person) and I am ready to receive your love.”

Take the handful of salt with your left hand and pour into the fire to end this spell. Then repeat the procedure with the parsley and basil leaves. Within 24 hours, your lover will come to visit you.

GYPSY SPELL TO DREAM OF THE ONE YOU WILL MARRY

In the morning of the ritual day, as soon as you arise from sleep, peel a small lemon.

Keep two equal pieces of the peel each about the size of a half-dollar.

Place the peels of the lemon into your right-hand pocket or purse. Keep it there throughout the day.

In the night while preparing to sleep, take the peel from your pocket and rub it around the legs of the bed then place both pieces of the peel under your pillow.

Lie on it as you sleep. If you dream of your loved one then it means that you will get married to that individual.

GYPSY SPELL TO REVEAL THE INITIALS OF YOUR FUTURE SPOUSE

Get a very bright red apple that has a very long stem. Then while sitting by the fire, hold the apple by the stem and twist it gently. For each twist, recite the letters of the alphabet. The letter mentioned as the stem breaks off is your spouse’s first initial.

After discovering your spouse’s initials, toss the stem into the fire then peel the apple’s skin off carefully in one long peel. Make sure you don’t mess it up because if you do, you will have to start again with a new apple.

After peeling the apple, take the peel in your left hand and throw it over your shoulder so that it falls behind you. After that, turn around and check what letter shape the peel has taken as that would mark the first letter of your future spouse’s last name.

If the apple peel breaks when thrown then that is a sign that you would have a stormy relationship.

If you suspect that you or someone close to you is a victim of a negative spell, you should carry out the following protective white magic spell.

On a Saturday afternoon, add all the aforementioned substances into a fire-resistant container.

Add a little alcohol then light the fire using a wooden match. While the fire is burning the ingredients, you have to recite the following prayer to be free of any negative spell that is causing you harm.

Expand into the Universe with your beautiful light and energy,

and light the darkness that has settled in my soul,

illuminate it and protect it from any source of evil and negative energy.

After this ritual, if you notice any sort of relief then that is a sign that the negative spell has been broken.

If you do not feel free and at peace yet, you must repeat this spell for seven days consecutively.

#1 – It is important to note that the term gypsy was originally used derogatorily to refer to the ethnic group known as the Romani. The Romani were and continue to be a group from Eastern Europe and possibly northern India. The word “gypsy” came from the mistaken notion that the Romani were from Egypt rather than Europe and Asia. The word later became corrupted and was applied to any group of nomadic travelers.

#2 – There are a number of books available in the Neopagan community that purport to teach “Gypsy magic,” but this is not authentic Rom folk magic. In other words, for someone who is not Romani to market the spells and rituals of this particular group is nothing less than cultural appropriation – much like when non-Native Americans attempt to market a practice of Native American spirituality. The Rom tend to view any non-Romani practitioners as outsiders at best, and at worst, as charlatans and frauds. 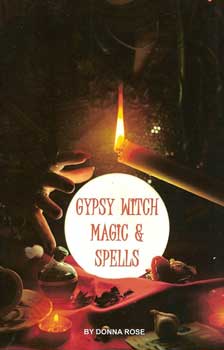