John the Conqueror, also known as High John de Conqueror, John, Jack, and many other folk variants, is a folk hero from African-American folklore.

He is associated with a certain root, the John the Conqueror root, or John the Conqueroo, to which magical powers are ascribed in American folklore, especially among the hoodoo tradition of folk magic.

It is good to remember that the High John the Conqueror is a complete magical system for these broad range of purposes;

Some people, can believe that all the roots are the same, but this is a common mistake. There is some overlap in their uses, but it’s important to know that they are different roots

The Root is masculine.

The root known as High John the Conqueror or John the Conqueror root is said to be the root of Ipomoea jalapa, also known as Ipomoea purga, an Ipomoea species related to the morning glory and the sweet potato. The plant is known in some areas as bindweed or jalap root. It has a pleasant, earthy odour, but it is a strong laxative if taken internally.

Folklore says, John placed his spiritual powers in the plant known as Ipomoea jalapa or Ipomoea purga, a powerful plant species introduced to the slaves by the American Indians.

“Only possess that root, and he can be summoned at any time.” (1)

High John the Conqueror root is affiliated with the element of fire, and can be used to “burn away” curses and obstacles and start new with a refreshed, confident spirit. Light High John Power Incense to help remove obstacles from a problem, and become unstuck.

In folk magic; it is used as one of the parts of a mojo bag. 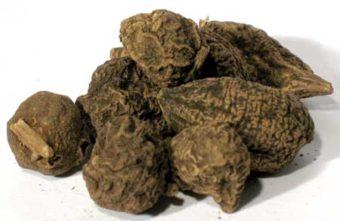 It is typically used in sexual spells of various sorts. It is likely that the root acquired its sexual magical reputation because, when dried, it resembles the testicles of a dark-skinned man. Because of this, when it is employed as an amulet, it is important that the root used be whole and unblemished.

Dried pieces and chips of the root are used in formulating oils and washes that are used in other sorts of spells. 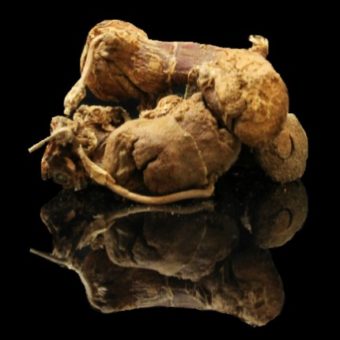 Low John root, and Galangal root are often confused as one and the same with high John root.

Low John is the root of the trillium or wake-robin, Trillium grandiflorum. It is carried on the person for assistance in family matters. It is also known as Dixie John or Southern John, and additionally is the basis for a hoodoo formula called Dixie Love Oil.

“Chewing John” is galangal, Alpinia galanga – a member of the ginger family. This is chewed much as chewing tobacco is chewed, to sweeten the breath and to calm the stomach.

It is said that if you spit the juice from chewing this root onto the floor of a courtroom before the judge enters, you will win your case.

Other names for this root are Little John and Little John to Chew. (This is called “Low John” in the Deep South.)

“Great Conqueror, please release me from any and all legal complications. Let me obtain mercy and grace to win this court case. May you strengthen the spirit, soul, and body of my lawyer so he has the power to fight for me. I claim victory over every adversary in this court case. Please keep injustice and false accusations far by tipping the scales of justice in my favor. Amen.” 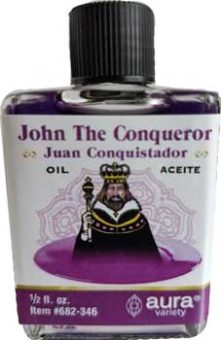 A Quick Note on High John the Conqueror

Not to be controversial here, but we have to really appreciate the story of High John in the hoodoo/Conjure tradition in which it originated. While there are a few versions of his legend, The fact is he came from Africa. Modern products depict John as a white man, and we strongly feel this is very disrespectful to his story, and the magic we are asking for assistance from when calling High John.

BMW is not shaming anybody by sharing this information, and nor are we suggesting you shouldn’t use these very affordable products. We do recommend that you research the story of John the conqueror, and when you are calling to him or saying his prayer, ensure that you also see him as an African man and not a white king.

If you have the time, we recommend that you buy the root, and create your own oil. Nothing will be more powerful than using your own handmade products.

There are a few….. Some have the story start and end in Africa, and others have John come over to America, and overcome the hardships of slavery.

Overcoming adversity is his spiritual gift to those who choose to tap into his spiritual energy. His root is a powerful ingredient in conjure and witchcraft work to encourage happiness and enduring strength. His legacy is one of luck, love, success and achievement and through his root.

Sometimes, John is an African prince who was sold as a slave in the Americas. Despite his enslavement, his spirit was never broken. He survived in folklore as reluctant folk hero, a sort of trickster figure, because of the tricks he played to evade those who played tricks on him. Joel Chandler Harris’s Br’er Rabbit of the Uncle Remus stories is a similar archetype to that of High John the Conqueror, out doing those who would do him in. Zora Neale Hurston wrote of his adventures (“High John de Conquer”) in her collection of folklore, The Sanctified Church.

like King Arthur of England, he has served his people. And, like King Arthur, he is not dead. He waits to return when his people shall call him again … High John de Conquer went back to Africa, but he left his power here, and placed his American dwelling in the root of a certain plant. Only possess that root, and he can be summoned at any time.

This is from Hurston’s published article in American Mercury magazine in 1943. In this article she relates a few stories about High John, enough to define him, but not an exhaustive survey of the folklore. The purpose was to present the nation with the hope-building and the power of this inspiring figure during the darkest days of World War II. The article ends with:

So the brother in black offers to these United States the source of courage that endures, and laughter. High John de Conquer. If the news from overseas reads bad, if the nation inside seems like it is stuck in the Tar Baby, listen hard, and you will hear High John de Conquer treading on his singing-drum. You will know then, that no matter how bad things look now, it will be worse for those who seek to oppress us. … White America, take a laugh from out of our black mouths, and win! We give you High John de Conquer.

Tips on Magic with High John

You may wish to burn his incense, use his bathroom products, sweep your floors to remove the negativity so you’re ready to face challenges, or even to ensure that luck and prosperity enters your door! Basically, to work with John, try and have him in your life as much as possible at least for a period of a month and really test if he can bring the changes into your life.

You may also wish to use:

John The Conqueror Perfume – Obstacles are in everyones life. High John was a prince who overcame all adversity. Succeed now with this excellent scent

John The Conqueror Spiritual bath –    may be added to ritual bath water or to wash water for ritual use in cleaning floors, walls, windows, etc.

High John The Conqueror Oil With Root 4 Dram – The root can also be transformed into a tincture and used in court cases, on legal paperwork

We suggest you do the spell on a Thursday in the hour of Jupiter.

Are the tips for success with this well. You should repeat this every week. The tools that we give you will allow for three months of work. Magic is always best when you begin to Layer your work.

You may need Chime Candle Holder

Magic for Court and Legal Cases