A wonderful choice for bringing in abundance, luck, prosperity and wealth. Everybody should have a talisman of this region on their altar to take advantage of their dynamic and long history in the magical arts. 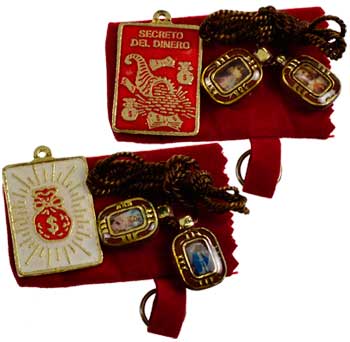 This Secrets of Money talisman is intended to empower your spells of money drawing and attract wealth.

Chinese Money Cat amulet
This money cat holds a gold coin. Some say it originated in Japan. It is said a monk cared for a stray cat even though he had little, then as a reward the cat brought fortune to the temple. Bring fortune to yourself with this prosperity money talisman.

Seal of Schemhamphoras amulet
A magical seal from the 6th and 7th Books of Moses, this seal attracts money, customers and financial success.

Discover Treasures amulet
This is a powerful charm that will aid you in obtaining wealth and help you hold on to it once it is yours.

Seal of Antiquelis amulet
From the 6th and 7th book of Moses this amulet can be used to summon one of the great princes to help provide great wealth and honor.

Second Pentacle of Jupiter
A powerful magical seal that utilizes the energies of Jupiter, this amulet aids in acquiring glory, honor, dignity and riches.

Raphael Orgone Amethyst & Green Aventurine
The Orgonite pendant is designed to balance your energy field. Archangel Raphael is one of the seven archangels who are the pillars of creation.

Tiger Eye is a great stone for encouraging wealth and money, as well as, protection, courage, energy, luck, and divination.

Green Calcite untumbled stones
Green calcite is a wonderful stone for healing and magic, where it is believed to possess double powers due to the quality of the properties of this crystal. A crystal that draws money and prosperity into you life especially when places around a burning green candle. Receptive energy with associations with the planet Venus and the Earth Element.

Fools Gold 1 pound
This packet of Fool’s Gold is quite useful in spells and rituals of money drawing, helping you bring prosperity to the home, business, and your personal life.

Pyrite cubed stones
Pyrite is a powerful protection stone and will shield you against all forms of negative energy. Also known as fools gold and is one of the best feng shui stones for attracting wealth energy. May also assist you in memory and stimulate intellect.

Pyrite, Black tumbled stones
This packet of tumbled black pyrite is quite useful in spells and rituals of money drawing, helping you bring prosperity to the home, business, and your personal life. The blackened color in this version of the Pyrite also adds a protective quality to its energy. Pyrite can also be added to any gris gris or mojo bag, shaman’s pouch or even just carried in your pocket or purse to help attract money and prosperity into your life.

We don’t stock these gold or bronze talismans, so we’re sending you to a link on Amazon to show you the style of talisman we recommend to draw on Jupiter’s energy. This particular brand has a quality finish, and on the back has a small symbol of the moon.

These talismans are found in the “Key of Solomon”, a grimoire of ceremonial magic attributed to King Solomon. Containing influences of Hermetic alchemy, Roman Astrology and Kabbalah, Solomon’s magic is a cornerstone of the Western Esoteric occult tradition.

The grimoire explains: “This serveth to invoke the Spirits of Jupiter, and especially those whose Names are written around the Pentacle, among whom Parasiel is the Lord and Master of Treasures, and teacheth how to become possessor of places wherein they are.”

Samuel Liddell MacGregor Mathers, a ceremonial magician and editor of the most common edition of the book, further describes: “This Pentacle is composed of Mystical Characters of Jupiter. Around it are the Names of the Angels:– Netoniel, Devachiah, Tzedeqiah, and Parasiel, written in Hebrew.”

The grimoire explains: “This serveth to invoke the Spirits of Jupiter, and especially those whose Names are written around the Pentacle, among whom Parasiel is the Lord and Master of Treasures, and teacheth how to become possessor of places wherein they are.”

Samuel Liddell MacGregor Mathers, further describes: “This Pentacle is composed of Mystical Characters of Jupiter. Around it are the Names of the Angels:–Netoniel, Devachiah, Tzedeqiah, and Parasiel, written in Hebrew.”

The grimoire explains: “This defendeth and protecteth those who invoke and cause the Spirits to come. When they appear show unto them this Pentacle and immediately they will obey.”

Samuel Mathers describes: “In the upper left hand corner is the Magical Seal of Jupiter with the letters of the Name IHVH. In the others are the Seal of the Intelligence of Jupiter, and the Names Adonai and IHVH. Around it is the Versicle from Psalm cxxv. 1:– “A Song of degrees. They that trust in IHVH shall be as Mount Zion, which cannot be removed, but abideth forever.”

The grimoire explains: “It serveth to acquire riches and honour, and to possess much wealth. Its Angel is Bariel. It should be engraved upon silver in the day and hour of Jupiter when he is in the Sign Cancer.”

Samuel Liddell MacGregor Mathers, further describes: “Above the Magical Sigil is the Name IH, Iah. Below it are the Names of the Angels Adoniel and Bariel, the letters of the latter being arranged about a square of four compartments. Around is the versicle from Psalm cxii. 3:–‘Wealth and Riches are in his house, and his righteousness endureth for ever.'”

The grimoire explains: “This hath great power. It serveth for assured visions. Jacob being armed with this Pentacle beheld the ladder which reached unto heaven.”

Samuel Liddell MacGregor Mathers, further describes: “The Hebrew letters within the Pentacle are taken from the five last words of the versicle which surrounds it, each of which contains five letters. These are, then, recombined so as to form certain Mystical Names. The versicle is taken from Ezekiel i. 1:– “As I was among the captives by the river of Chebar, the heavens were opened, and I saw visions of Elohim.” In my opinion the versicle should only consist of the five last words thereof, when the anachronism of Jacob using a Pentacle with a sentence from Ezekiel will not longer exist.”

The grimoire explains: “It serveth for protection against all earthly dangers, by regarding it each day devoutedly and repeating the versicle which surroundeth it. “Thus shalt thou never perish.”

Samuel Liddell MacGregor Mathers, further describes: “The four Names in the Arms of the Cross are:- Seraph, Kerub, Ariel, and Tharsis; the four rulers of the Elements. The versicle is from Psalm xxii 16, 17:– “They pierced my hands and my feet, I may tell all my bones.”

The grimoire explains: “It hath great power against poverty, if thou considerest it with devotion, repeating the versicle. It serveth furthermore to drive away those Spirits who guard treasures, and to discover the same.”

Samuel Liddell MacGregor Mathers, further describes: “Mystical Characters of Jupiter with the verse:–‘Lifting up the poor out of the mire, and raising the needy from the dunghill, that he may set him with princes, even with the princes of his people.’–Psalm cxiii, 7.”