The Tower (XVI) is the 16th trump or Major Arcana card in most Italian-suited Tarot decks. It is used in game playing since the 15th as well as in divination since the mid-19th century.(4) This card follows immediately after The Devil in all Tarots that contain it, and is associated with sudden, disruptive, revelation, and potentially destructive change.

The image of the Tower card is powerful, depicting a solid tower being struck by lightning, and fire crawling out from the small windows at its top.

The Tower is commonly interpreted as meaning danger, crisis, destruction, and liberation. It is associated with sudden unforseen change.

“When we are so entrenched in one single way of life, or one inflexible way of thinking we sometimes need to get a little rattled to get out of our daze. This is exactly what the Tower card represents. It’s as if we we’ve been comatose and the Universe comes along with those electric paddles to jolt our hearts back to life.” (1)

The change is positive, even though it does not feel very positive.

For example, your partner’s temper may have exploded and they called you every filthy name they could think of, which came as quite a shock to you. Or it’s possible that your partner had a violent outburst and hit you or pushed you around. Sometimes you end up walking on eggshells because you are afraid of your partner’s temper.

Abusive relationships have their ups and downs, but one day your Tower will explode to save you and the universe will release you from a bad relationship.

The Tower breaks down foundations that are not stable, totally destroys the foundation, and makes you clean up the rubble and build a new foundation. You are forced to pluck out the weeds (the old foundation) and plant a new beginning (a new foundation) that is right for you. 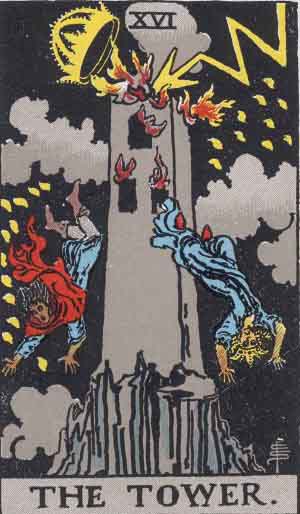 Falling: Falling is a befitting way to convey absolute loss of control. There is no railing and no net to save us. When we’re free-falling there’s not one thing that can be done but fall and hope for the best when we land. Most decks depict two figures falling: A male who represents conscious thought/action, and a female who represents unconscious thought/action. In this case, this is a symbol of duality and opposition. The two figures represnt conflicting thoughts and actions, inevitably leading to an eruption. This concept is at the crux of all the Tower Tarot card meanings.
.

Fire: Fire is typically an aggressive symbol. It obliterates everything in its path, leaving little semblance of the original landscape. This is further indication that the Tower card means serious business, and when change comes it will significantly alter the landscape of our lives. It’s also worth mentioning that the fire in the card burns from the top down. This indicates that change is long overdue, and that we may be “at the top of our game” when a shift comes. Read more about fire symbolism in the Tarot here.
.

Lightening: Lightening has long been seen by ancient peoples to be a direct signal from God. Some Native Americans thought lightening was brought about by a wink from the Thunderbird who was considered the Great Creator. In India, lightening was considered a flash from the third eye of Shiva, symbolizing the light of truth and enlightenment. Lightening is a powerful message of truth emanating from our highest source forcing us to conduct a reality check.

The Crown: In the Rider-Waite deck, the top of The Tower is a crown, which symbolizes materialistic thought being bought cheap.

You might experience a sudden shock regarding: your home, job, severing of a friendship, a discovery that your partner is having an affair, divorce, bankruptcy, an unexpected accident, illness or job loss – anything that catches you by surprise and is out of your control.

It’s possible that your partner exploded and called you filthy names, or your partner had a violent outburst and hit you or pushed you around.

Maybe you are the one who destroyed a relationship because you did not respect your partner and you were ready to build a new foundation.

You and your partner are fighting all the time over stupid things and cannot agree with each other. Every conversation seems to become a recipe for disaster.

You are stuck in a bad situation and unwilling to move on or are staying in a relationship that is making you miserable. You are unwilling to change or alter your path and remain stagnant because you fear that you cannot make it your own.

Then again, you might not be able to channel the Tower’s energies into your life at this time. If this is the case, you or your partner are holding everything inside and may be ready to explode. There is a very uncomfortable feeling about your relationship and how the future is going to play out.

The Tower predicts that an important event may occur within the next 30 days.