The demon is universally regarded as an incorporeal spirit who can actualize in many ways, yet is usually depicted as a grotesque hybrid: part Homo sapiens, part wild beast, it always walks upright.

It has other recognizably human features, but often quite unnatural or uncommon ones, such as way too many fingers or none at all, no bones, no skin, or perhaps several heads. There is something about its mouth and teeth that is always alarming. It has hooves or talons, batlike wings, and intense heliophobia. In its basic shape, scales or fur covers at least half its body (the hid- den half), and its “real face” is one that inspires terror.

Even when at a village dance, dressed to kill and looking irresistibly attractive, it can always be recognized by its feet: whether they are those of a rooster, goat, goose, or pig, webbed, or fish/snake bottom, a discreet glance down will confirm its true nature. 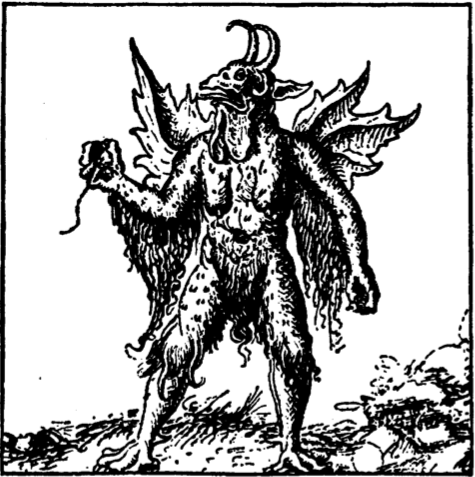 In tales of enchantment the human kisses the bear, frog, or ugly crone only to find in its place a handsome prince or beautiful maiden. With the demonic spirit, an inverse trans- formation occurs: the human is lured out in the night by a beauty or handsome stranger for a tryst, only to discover a hideous serial killer with a fanged overbite.

The “Basic Demon,” as depicted, obviously cannot be the being that attracts a traveler; all these creatures enchant by “shape-shifting” into someone or something highly desirable to that special traveler. Some say the noncorporeal spirits hide within natural shapes (some even inhabit corpses). Like love, they do manage to alter reality for a while.

Demons are still the most misunderstood of the ancient spirits. Many demons were once ancient deities or nature spirits who were degraded or demoted over the millennia by later cultures that settled in their areas.

Together they form the most archaic spirit strata on earth and they’ve never lost their power to enchant us. Often described as unpredictable, magical, and riveting, demons have always lived close by — much closer than angels — too close to ignore and yet too “Other” to get to know.

Humankind has always regarded demons with ambivalence: as supernatural adversaries who must be com- bated, yet also as a source of superhuman secrets, which can be wrested from them.

Universally demons have been considered agents of both good and evil, and have been looked upon as vital or negative forces, but share key characteristics: all demon species are supernatural spirits of semi-divine status with limitless energy, excessively passionate natures, shape-shifting talents, and preference for concealment, “indwelling,” and darkness.

Demons are everywhere, in every part of the world and in every moment of recorded history.

Demons include the genii loci who imbue and protect their natural habitats at any cost and fairies who’ve retreated farther and farther into the remaining pockets of wilderness.

Other demons are personifications of our own passions, impulses, and desires, lurking about in the dark, hidden terrain of our unconscious, and their habits hold pro- found insights into the nature of our minds. Still others serve as explanations of misfortunes or aberrant events, or are seen as portents bearing chilling prophecies of death or doom. The wide array of demon functions and roles are as fascinating as their intense personalities.

Some demons serve as portals to sacred ground. Because demons can be protective (at times overprotective), they were often employed as guardian spirits to watch over the sanctuary entrance.

This useful, evil-averting demon function is still displayed in many cultures at places of worship, and it continues in a more concealed form just as the mythic traveler approaches a forest, or attempts the ascent of a mountain, a passage through the desert, or stands at the banks of rivers, at the well, at the doorstep.

Demons are also the essence of human storytelling. People everywhere tell similar tales, which serve to transmit values and contain clear messages about what traits are considered desirable or undesirable. The demons are brilliant performers who entertain us marvelously as the mischievous trickster, the town menace, the sultry temptress, in what have become our classic plots.

Without the choice between the demonic and, for lack of a better word, the angelic, there can be no moral to the story. There cannot even be a plot. There can be no story without internal or external struggle; no hero without antagonist; no pain, no gain; no quelling, no quest. The demon is always a challenge.

Demonic lore was pre-media campfire entertainment. Many grisly scenarios seem concocted as thrillers. The spirits outdo each other: What’s worse than a buffalo-headed giant? A skinless centaur. What’s worse than meeting it on a secluded mountain path? How about in your bed when you were least expecting it? Worse? How about if you always thought he was your husband? Many of the bogey features of the demonic creatures were probably intended to scare young children into staying nearby!

Demons would be virtually unstoppable were it not for the few important attributes they universally lack: they have no capacity for reason, love, or compassion. The human hero has the light of day as well as reason on his side because most demons are doomed to vanish at dawn. Many of the most powerful demons can be as easily tricked as little children because, although supernatural, they lack the intelligence of angels or the human’s potential ability to think logically or gain wis- dom. They also lack the human ability to rationalize or justify action. They simply are. They are also quite literally heartless and love is so alien it can melt them.

Like human beings who can’t act reasonably when in the throes of rage, or reflect on past history when determined to get what they want, demons are driven entirely by instinct.

Throughout much of demon history, the genus has been associated with malign forces (or life-eating powers), such as storms and disease, in part because they had long served as explanations for aberrant natural phenomena. Demons have been held responsible for such events as eclipses, comets, volcanic eruptions, and illness both mental and physical of var- ious kinds (a “stroke” is left over from the “fairy stroke,” which was understood to be the cause of sudden paralysis), and some were considered agents of both fortune and mis- fortune, portents of death when sighted, and choreographers of Fate.

Throughout all traditions the demonic spirits have avoided the light of sun, love, truth, or reason. However, by circling Goodness darkly, or ignoring it altogether like swarms of fairies, or attacking it head-on like fallen angels, all these subversive spirits throw our universal ideas of Good into illuminated relief. They are the grace notes that accentuate the human chorus of Joy. They (inadvertently) contribute to humankind’s idea of Goodness.

4 thoughts on “Unpacking the mysterious missions of demons”