Wheel of the Year

Every year the pagan Goddess comes to relieve us of the harsh winter. 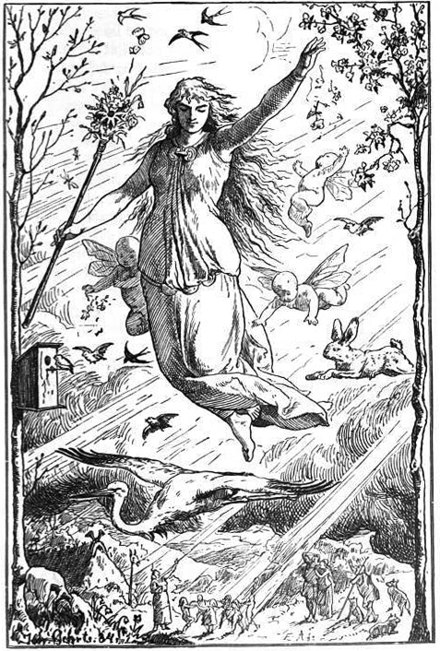 Ostara is the Pagan celebration of the Vernal (Spring) Equinox.  This is the day when spring begins, according to the solar calendar.  The daytime and the nighttime are of equal length, hence the name “Equinox.”

This is a time for beginnings! The Goddess frees herself from the winter cold and is ready to seed the earth, and the God awakens as a young eager youth!

On the LHP, “Easter” was stolen from Astaroth. Originally known as “Ashtar.” This holiday coincides with the Vernal Equinox of spring when day and night are of equal length. Known as “Eastre” to the Anglo- Saxons. As the Goddess of fertility, she was associated with rabbits and eggs.

Other names include: Easter, Eastre, Eos, Eostre, Ester, Estrus, (Estrus is when an animal goes into heat; mating season) Oestrus, Oistros, and Ostara. Again, the “Lamb of God” was from the Zodiac sign of Aries the Ram which occurs every spring.

Ôstara ) is a Germanic goddess who, by way of the Germanic month, is the namesake of the festival of Easter in some languages.

Ēostre is attested solely by Bede in his 8th-century work The Reckoning of Time, where Bede states that during Ēosturmōnaþ (the equivalent of April), pagan Anglo-Saxons had held feasts in Ēostre’s honour, but that this tradition had died out by his time, replaced by the Christian Paschal month, a celebration of the resurrection of Jesus.

There is much conversation and debate as to where the names and traditions evolve, so we direct you here for a detailed explanation.

One thing is certain….Easter had nothing to do with Jesus! Another pagan* tradition copied by the popular new* religions.

If you are looking for an Ostara ritual to perform this coming Ostara celebration, here is one from the Alexandrian (Wiccan) tradition from Stewart Farrar’s “What Witches Do.”

The ritual below is for a group, however, like any ritual, feel free to modify according to your own situation.

For the altar, the censer is lit. Flowers decorate the altar and circle. A Symbol of the Wheel is on the altar, flanked with burning candles, or with fire in some form – torches, or small tripods with fire in their cups.

The Symbol of the Wheel may be a plain disc, or an eight-spoked wheel, or the pentacle. Alex and Maxine Sanders used a circular mirror with a broad frame, also circular, decorated as a twelve-pointed star.

In the centre of the Circle is either a cauldron full of inflammable material or (out of doors) a bonfire ready to be lit.

HPS then stands in the West, and the HP in the East, both with carrying wands.

We kindle this fire today

In the presence of the Holy Ones,

Without malice, without jealousy, without envy, Without fear of aught beneath the Sun

But the High Gods.

Be thou a bright flame before us,

Be thou a guiding star above us,

Be thou a smooth path beneath us;

Kindle thou within our hearts

A flame of love for our neighbours,

To out foes, to our friends, to our kindred all, To all men on the broad earth;

From the lowliest thing that liveth,

To the Name which is highest of all.

HPS then draws invoking pentagram before the HP, and then hands the Wand to him, together with the scourge.

The Maiden strikes a light and hands it to the High Priest, who lights the cauldron or bonfire. Note the HP hands all the tools he is holding to another person, or can place them down before carrying onto the next step.

He (carrying a wand) and the High Priestess (carrying a sistrum) lead the dance, with the rest following in couples.

Each couple must leap over the fire. The last couple over the fire before it goes out must be well purified. The man must then give a fivefold kiss to each of the women, as the woman to the men, or any other penalty the HPS shall decide.

Here are the top 5 books on learning Pagan/Wiccan traditions: