What is Tetragrammaton?
The most powerful and personal Hebrew name of God. The Tetragrammaton is used in MAGIC as one of ineffable NAMES of power.

“Tetragrammaton” means “four-letter name.” The Tetragrammaton consists of four Hebrew letters, YHVH (Yod, Heh, Vau, Heh). The exact pronunciation of the Tetragrammaton is not known; it is usually pronounced “Yahweh.” A common variation is “Jehovah.” These pronunciations are based on the addition of vowels to the original Hebrew name, which had none. According to tradition, YHVH is so powerful that it should not be spoken except by high priests on Yom Kippur. Other names are substituted for it, such as “Adonai” and “Elohim.”

Since the name of God could not be uttered, other names of God were substituted. During Talmudic times, these names multiplied, all derived from the original four- letter Tetragrammaton. Secret 12-, 22-, and 72-letter names were taught to only the most worthy. These names were joined by many other names of other numerical values.

In the seventh century, Isadore of Seville compiled a list of 10 names of God that were used frequently: El, Eloe, Sabbaoth, Zelioz, Ramathel, Eyel, Adonay, Ya, Tetragrammaton, Saday, and Eloym. Another commonly used name was Ehyeh Asher Ahyeh (“I Am That I Am,” which MOSES heard from the burning bush).

The 12-letter name of God was out of use by Talmudic times. The 22-letter name of God first appeared in the SEFER RAZIEL, though probably has much older origins. The Sefer Raziel offers no interpretation of it. Anaktam Pastam Paspasim Dionsim quickly was incorporated into CHARMS and INVOCATIONS and was added to the reading of the Priestly Benediction in the synagogue in the 17th century.

The 42-letter name of God may have been derived from an old prayer, though medieval mystics held that it came from the first 42 letters in the Bible.

The 72-letter name of God is divided into triadic syllables. According to the Sefer Raziel, it cannot be surpassed in power, and no magic can be done without it. The name is derived from three verses in Exodus 14:19–21, each of which contains 72 letters. Different parts of the name have different uses. For example, the first part of the name will conquer evil and drive off evil spirits, while the second part will protect against the EVIL EYE and DEMONS and will help one acquire wisdom.

YHVH is sometimes appended to the names of the highest ANGELS around God to denote their power and stature. JAKOB BÖHME analyzed the name Jehova, stating that it

“is nothing else but a speaking forth, or expression of the Threefold working of the Holy Trinity in the unity of God.” He noted that each letter “intimates to us a peculiar virtue and working, that is, a Form in the working Power”:

For I is the Effluence of the Eternal indivisible Unity, or the sweet grace and fullness of the ground of the Divine Power of becoming something.

E is a threefold I, where the Trinity shuts itself up in the Unity; for the I goes into the E, and joineth I E, which is an outbreathing of the Unity itself.

H
H is the Word, or breathing of the Trinity of God.

O is the Circumference, or the Son of God, through which the I E and the H, or breathing, speaks forth from the compressed Delight of the Power and Virtue.

V
V is the joyful Effluence from the breathing, that is, the

Such a Word should in fact be so potent that man cannot hear it and live.

Such a word was indeed the lost . It is said that at the utterance of this name the Universe crashes into dissolution. Let the Magician earnestly seek this Lost Word, for its pronunciation is synonymous with the accomplishment of the Great Work.

By “Great Work,” Crowley referred to the alchemical or spiritual enlightenment of the magician, a process unique to every person. 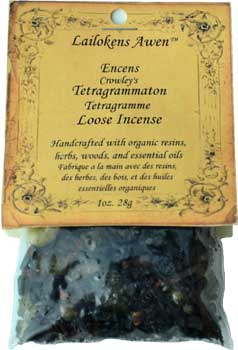 This incense is described by Aleister Crowley in his Confessions, “There is an incense sacred to Tetragrammaton. After the cakes of light and the incense of Abra-Melin, it is the most powerful of all known perfumes. In fact, it is in a sense more powerful than they are, for they are definitely consecrated to particular purposes, whereas it is entirely without conscience. It represents the blind force of the four elements and by its use one can bring them to manifestation. Being in itself neither good nor evil, it is extraordinarily dangerous.”

One thought on “The Tetragrammaton”