Every year the pagan Goddess comes to relieve us of the harsh winter.

Ostara is the Pagan celebration of the Vernal (Spring) Equinox.  This is the day when spring begins, according to the solar calendar.  The daytime and the nighttime are of equal length, hence the name “Equinox.”

This is a time for beginnings! The Goddess frees herself from the winter cold and is ready to seed the earth, and the God awakens as a young eager youth!

On the LHP, “Easter” evolved from Astaroth. Originally known as “Ashtar.” Perhaps you should modify the ritual below to dedicate this time to her! This holiday coincides with the Vernal Equinox of spring when day and night are of equal length. Known as “Eastre” to the Anglo- Saxons. As the Goddess of fertility, Astaroth was associated with rabbits and eggs.

There are a variety of gods and goddesses that originate from Egypt and Western Asia that can also be drawn upon when celebrating this time of year. Osiris, Adonis, Tammuz, Attis and their consorts Isis, Aphrodite, Ishtar and Cybele are all deities from these regions that are familiar to many Witches.

The above gods are all sacrificial vegetation deities that represent the yearly cycle of decay and revival, which they show through their death and resurrection.

The goddesses, on the other hand, are really representative of one Great Maternal deity.The rites of spring in a variety of Western Asian cultures seem to have incorporated the common themes of the sacrifice of a god-figure and the sanctified mating (and sometimes prostitution) of women with a variety of lovers.

Some of these events could be decidedly bloody. There was a myth that Attis killed himself by impaling his genitals upon a pine-tree. In Phrygia during the celebrations of his death and resurrection those who were his priests would self- castrate when entering the service of Cybele his lover/mother. Later, when the goddess was adopted by the Romans, the rites of Attis (March the 22nd-24th) became increasingly orgiastic over the ceremonial period, culminating in the Days of Blood where it appears that the priests would mutilate their genitals and bash them against an image of Cybele. This giving up of masculinity seems to have identified the priests with the fate of the god, as well as somehow having been a way of ensuring that the goddess was impregnated with life-giving energy. This perhaps explains why other goddesses such as Artemis of Ephesus and Astarte of Hierapolis were served by eunuchs.

Whilst the extremes of these rituals saw men castrated in the name of a goddess, women seem to have given up their bodies. For example, in Cyprus they were required to prostitute themselves to strangers at the sanctuary of the goddess Aphrodite or Astarte before marriage. In Babylon, regardless of whether a woman was rich or poor, she had to sell herself at least once at the temple of Ishtar and give her earnings to the service of the goddess. Similar practices also took place at Heliopolis and Baalbec in Syria, whilst at Byblus women were given the choice of shaving off all their hair or having sex with unknown men during the mourning period for Adonis. Not always was this sex with strangers, sometimes priestesses would couple with monarchs of city-states in a hieros gamos or sacred marriage, as happened in the Sumerian temple of the goddess Inanna. Both participants would have believed that through their union fertility was ensured for themselves, their people and their country. Apparently men and women throughout the realm would try for a baby at the same time, in the hope that there would be winter births when people were away from working on the land.

Through this device the populace was then more able to give attention to their offspring during what would have been a very dangerous stage of life.

Practices such as these were believed to ensure that plants and animals could be aided to reproduce, for these unions on Earth would somehow stimulate the goddesses and gods to mate as well. At root sympathetic magic was being worked. 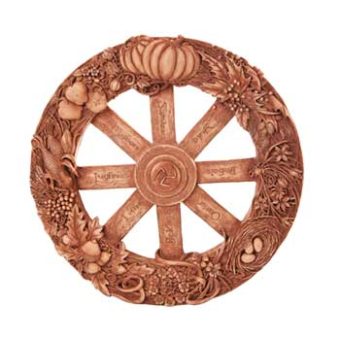 In the Gardnerian Book of Shadows it states that during the ritual of the spring equinox “The symbol of the wheel should be placed on the altar upright, decked with flowers, flanked with burning candles” . This suggests a link with the solstice fire festivals, where the burning of a wheel that was set in motion down a hill-side was common place.

Another feature, often borrowed from the same work, is the High Priestess’s carrying of a phallic or pinecone-tipped wand, used to emphasize fertility, as well as her ultimate power over masculine forces that must be excited by her if the land is to be fertilized.

If you are a solo practitioner, you don’t have to follow these coven base rituals, but feel free to modify these to suit yourself in your own solo practice. If you are new to celebrating these holidays, try and integrate something each year into your existing celebrations. Also, if other members of your family are practising another religion, sometimes adding some level of symbol to your home, can make you feel like you are practising paganism without flaunting it in people’s faces, yet you can still feel Pagan.

For example, the altar can be decorated with seasonal flowers such as crocuses, hellebore, primroses, daffodils, tulips and hyacinths. The altar cloth could be of a fresh yellow, green or sky blue -all colors associated with the spring. A symbol of the Sun (or wheel) should be on the altar, as well as a phallic wand (a pine cone on a stick is ideal). If using a cauldron place this in the center of the circle space and put a live plant within it (not cut flowers).

IDEA – Some people like to bake hot pentacle or pentagram buns for the occasion, which make a great alternative to the Christian hot-crossed variety eaten around this time of year.

A Symbol of the Wheel is on the altar, flanked with burning candles, or with fire in some form – torches, or small tripods with fire in their cups.

In the centre of the Circle is either a cauldron full of inflammable material, or (out of doors) a bonfire ready to be lit.

HPS then stands in the West, and the HP in the East, both with carrying wands.

“We kindle this fire today
In the presence of the Holy Ones,
Without malice, without jealousy, without envy, Without fear of aught beneath the Sun
But the High Gods.
Thee we invoke, O Light of Life;
Be thou a bright flame before us,
Be thou a guiding star above us,
Be thou a smooth path beneath us;
Kindle thou within our hearts
A flame of love for our neighbours,
To out foes, to our friends, to our kindred all, To all men on the broad earth;
O merciful Son of Cerridwen,
From the lowliest thing that liveth,
To the Name which is highest of all.”

HPS then draws invoking pentagram before the HP and then hands the Wand to him, together with the scourge.

The Maiden strikes a light and hands it to the High Priest, who lights the cauldron or bonfire. He (carrying a wand) and the High Priestess (carrying a sistrum) lead the dance, with the rest following in couples. Each couple must leap over the fire.

The last couple over the fire before it goes out must be well purified.

The man must then give a fivefold kiss to each of the women, as the woman to the men, or any other penalty the HPS shall decide.

Ritual in “A Witches Bible” by Janet Farrar

Products to Help You with Ostara